Getting back the taste of European adventure

Within the framework of the seminar on “The past and the future of European civilization” by Antoine Arjakovsky and Jean-Baptiste Arnaud, Co-Directors of the “Politics and Religions” Department of the College of the Bernardins’ Research Center

The research project “The past and future of European civilization” was initiated by the College of the Bernadins in 2007, in partnership with Confrontations Europe, the Federation of Catholic Universities in Europe, the Jean Monnet Foundation, the Robert Schuman Foundation, the Jacques Delors Institute, the Maison de l’Europe, the University of Luxembourg, the Semaines Sociales de France as well as Ouest France, La Croix and Gazeta Wyborcza.

It has taken form through monthly seminars at the Bernardin College, through an in-depth study of the History of European consciousness, through participation in meetings and colloquiums in several European countries and through links of cooperation established with several European institutions. It has given itself the two-fold goal of, on the one hand, redefining the essence of European identity, its personalist humanism and its desire to work towards peace and, on the other hand, to propose ways of putting into practice the European project, not only at the level of the European Union (E.U.), but also at the level of the Parliamentary Assembly of the Council of Europe.

The different institutions that are involved wanted to respond to the needs of the European Parliament to formulate “a new story for Europe” and to the initiatives of the European Commission and the French government to organize public consultations concerning the future of the European project. This research also falls within the perspective of the double issues at stake in 2019; European elections and the expected 4th summit of the Heads of States of the Parliamentary Assembly of the Council of Europe. Indeed, it is important to anticipate the possible articulations between European politics and the project of European civilization ranging from “the Atlantic to the Urals.”

This renewal of personalist reflection could be useful in view of the European elections and the up-coming summit of the Heads of States, which will treat of the future of the Parliamentary Assembly of the Council of Europe. This Assembly, in fact, is charged with putting into practice a policy of the rights and duties of persons throughout Europe. It would certainly be helped in its task of resolving the tensions that exist on the continent by developing the foundations and consequences of the personalist model. It could also inspire the process of a re-foundation of the European political project for the decision-makers of the European Union if all the implications of this on-going redefinition of humanism are presented. 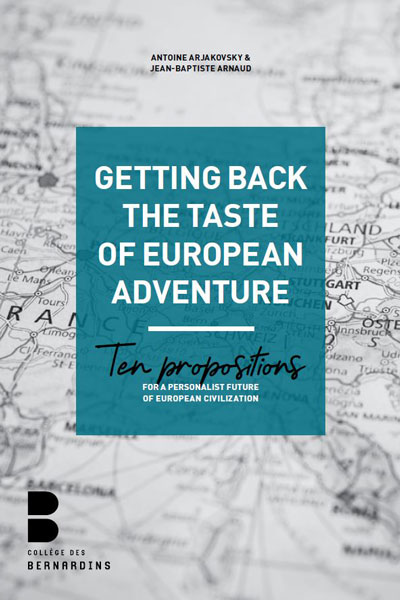